The worst thing about waking up early on a Sunday, is the fact that you gotta wait that much longer to take communion and eat lunch. It’s bout 7am, and I’ve been up since 5, just chatting with a few friends from back home.

This last week has been a little intense, as you may have read, but I’m grateful for sure. I feel New York has numbed me from some basic feelings, and I’m starting to see that balance again between joy and sadness, and I welcome it with open arms. I’m learning that life isn’t fair, but it’s beautiful nonetheless.

So last week, I got a chance to taste the best of North and South Indian cuisine here in Nairobi; I gotta say, hands down, the best Indian food I’ve ever eaten. This fact alone is reason enough to move out here permanently. There is one difference, however. “Chicken Tikka Masala” is called “Butter Chicken”. Doesn’t that sound so great though? Butter Chicken? mmmmmm

Ashok, and Cameron, both roommates, and med students from University of Washington have been great at showing us around different places, and making us feel at home here. They cooked us up some dinner last week, too. You know, I think it’s time we returned the favor.

So, Friday evening, we had a farewell dinner for the ITECH team. What is ITECH, you ask? It stands for the International Training and Education Center for HIV/AIDS. They develop curriculums, offer trainings, and support for people and organization dealing with HIV/AIDS relief around the world. And they’ve been with the Coptic Church here doing a pilot program, and it’s been such a great time having them with us. They’ve offered the Hope Center so much in terms of resources and support. Dr. Charles, Claire, and Jennifer (who they endearingly refer to as ‘J’) were on their way to South Africa the next day, after a two-week training session with us, so we took them to the Westlands (a neighborhood in Nairobi) for the best North Indian cuisine in the region. It was such a great time, catching up with everyone, sharing many laughs, thoughts. I was surrounded by people who’s life’s work is to help others. Doctors, administrators, and educators, all in the non-profit sector. These are the kinds of people that inspire me, and I have to say being here is making me wonder if I may have found my niche? Who knows – time will tell ;) Claire, Jennifer, and Charles in the glow of Nadia’s brake lights.

So yesterday, Ashok and I were supposed to run through Ngong Hills with the Kenyan Running Club, but the guy who was supposed to take us there never showed up, which is fine, because we were gonna cancel on him anyway cuz it was too hot. This isn’t a regular run i’m talking about. It’s 3 miles, straight up hill, and 3 miles back down again! No thank you, not in yesterday’s heat!

So instead we did a short run by Ashok’s place. Getting to Ashok’s was interesting. I asked the guard where I could find a cab, and the guard looked around and whistled at some random guy sitting on the corner, the guy comes over, obviously intoxicated, and the guard asks this man to help me find a cab. Why I went with him, I don’t know. So he takes me to Dunga. Dunga is basically a set of food take out stands, that violate just about every health code known to our galaxy and beyond. Mena ate from there over a year ago and is still suffering the consequences. But at Dunga, there was a cab driver who wanted to charge me 400 shillings for a ride, and I was like “No way! I may be mzungu (swahili for white-man) but you’re not gonna take me for a ride (budum ching!)” And he was like “Ok ok! 375 KSH”. I’m like “Dude. 200 KSH” he’s like “My friend we say 350” to which I reply “200” and he says “ok ok $250” so at this point I’m tired and agree. The man who took me to Dunga said “Now you will buy me a drink?” So I convinced the cab driver to do it since I didn’t have change. What an ordeal.

Anyhow, Ashok and I had a great run through some of the backroads of Nairobi. We got some hillage, some downage, some sewage, and some carnage. My favorite sight, however, was the “Jesus is Lord Butchery“. How random.

I decided to run back home after we got back to Ashok’s, it was only about a mile or two away. So I’m running, feeling good, feeling good, feeling good… I look and I’m approaching a bus stop. No big deal, just some people here and there. I run, I run through the people, sweat dripping on my brow, and I pass by this man, and as I was right next to him, mid-stride, he decides to come out of the apparent day dream he was in, and tries to catch the bus that was pulling away and starts running, and he runs into me, in such a perfect way that his left leg catches my right leg and i go flying into the street, and land on my thigh against the corner of the curb.

The man freaks out and was like “I’m so sorry, so sorry” to which I whipped out the little confrontational Kiswahili I knew. He wouldn’t get on the Matatu (the privately owned public mini-buses that have fun sayings painted on them like ‘Praise Jesus’ and ‘Smoke Blunts’ on the same matatu). 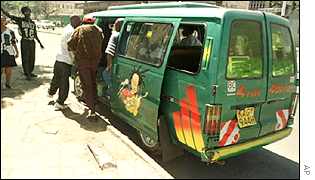 So, after I got up, the man was still apologizing profusely and a crowd gathered around us. I just patted the man’s back and told him to get on the matatu, and he thanked me. Strange situation huh?

Anyhow. I’m left with a hematoma my thigh and it’s very painful to walk. Why am I so injury prone these days?

The other night, I received an SMS from Judd…

Arrived safely in Rome with Massimo. He is in the hospital here and doing well.

It was a great way to end the evening.  I’ll end this off with a few more photos. Chau! xox